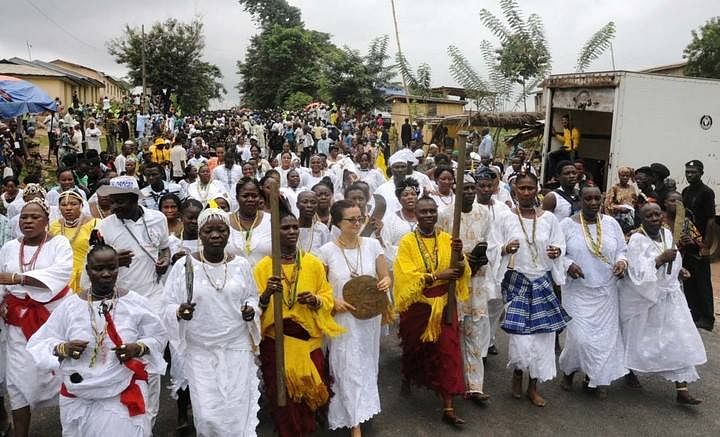 Tight Security As Osun Osogbo Festival Holds Grand Finale——Security personnel were on Friday deployed to strategic places around the Osun Osogbo Groove to prevent a breakdown of law and order as the curtain draws on the Osun-Osogbo Festival, the Newsmen reports.

The Federal Road Safety Corps (FRSC) officials were seen frantically controlling traffic on some streets leading to the venue of the grand finale of festival.

Similarly, local vigilante officials were on hand at the venue, armed with locally made guns, patrolling the Osun River arena and giving support to other security agencies.

NAN reports that tourists from Brazil and Slovenia were heavily guarded at the grand finale of the festival.

NAN reports that the foreign tourists were guarded by Armed Tactical Squad of the Nigeria Police into the grove.

Devotees, as well local tourists trying to take pictures with the foreign tourists, were prevented by the security personnel from doing so.

The tourists were guarded by policemen to the podium prepared for dignitaries.

The foreign tourists, who were also seen with their countries flags and that of Nigeria, were dancing to the local songs.

NAN reports that the Osun Commands of the Police and the NSCDC had earlier assured residents and tourists coming for the festival of adequate security.

The Police spokesperson, SP Yemisi Opalola, told NAN that security had been put in place, adding that adequate personnel had been deployed to provide security at the event.

According to her, watertight security has been provided by the police and other security agencies.

Also, the Osun NSCDC Command Spokesman, Mr Atanda Olabisi, stated that Osun Central Command of the agency had deployed personnel to provide security at the festival.

Olabisi said that intelligence officers were also available, to provide security during and after the festival.

FRSC Sector Commander in the state, Mr Paul Okpe, earlier stated that no fewer than 50 officers from its Command would be available to control traffic on routes leading to the festival arena.

NAN reports that some of the devotees at the grove “possessed “by the spirit of the  Osun goddess were seen rolling unconsciously on the ground.

According to the Curator and Site Manager of Osun Osogbo Grove, Mr Adekunle Fatai, no fewer than 60,000 devotees and tourists are expected at the grand finale on Friday.

The Osun-Osogbo Festival, a UNESCO certified festival,  holds annually in Osogbo with grand finale coming up on Friday.

Meanwhile, some of the devotees at the grove possessed by the spirit of the  Osun goddess were seen rolling unconsciously on the ground.

According to the Curator and Site Manager of Osun Osogbo Grove, Mr Adekunle Fatai, no fewer than 60,000 devotees and tourists are expected at the grand finale on Friday.

The Osun-Osogbo Festival, whose history dates back to many centuries, is usually celebrated in a grove in the

It is among the last of the sacred forests that adjoined the edges of most Yoruba cities before extensive urbanisation.

In recognition of its global significance and cultural value, the Sacred Grove was inscribed as a UNESCO World Heritage Site in 2005.

For the people of Osogbo land, the festival represents traditional cleansing of the town and cultural reunion of the people with their ancestors and founders of the Osogbo Kingdom.