#Lukaku Out? As #Chelsea Reportedly Accept To Sign #Lewandowski

Lukaku was tipped to be a lethal weapon for Thomas Tuchel since his Inter Milan’s departure but the 28 year old Belgium hasn’t lived to Chelsea supporter’s expectations and therefore the need to sign another striker. 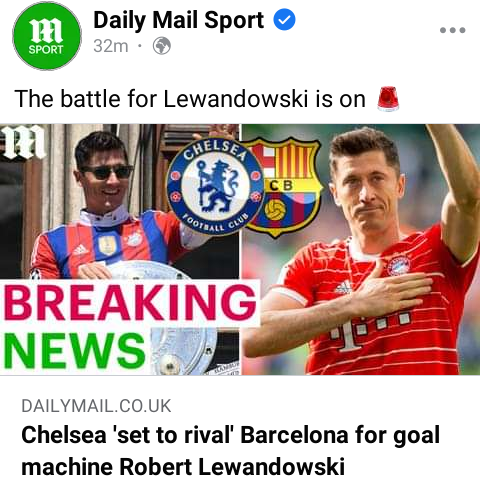 View pictures in App save up to 80% data.

Lewandowski who has scored over 450 goals for the Germany heavyweights will be seeking for a new challenge and it’s claimed that a move to Stamford Bridge is likely only if he will fail to sign for Xavi’s side.

The 34 year old Poland striker is Thomas Tuchel’s admirer and being viewed as a perfect alternative to struggling Romelu Lukaku which be the end of his road at Stamford Bridge.

Meanwhile, Chelsea manager Thomas Tuchel is as well keen on finding a better replacement for Antonio Rudiger and Cesar Azpilicueta with Pau Torres and Jules Kounde linked with a possible switch.

Currently, Chelsea is sanctioned and unable to make transfers – but that’s projected to end soon, with the Todd Boehly takeover into the final administrative details.

After that, they will begin planning their summer, as they are already behind most of Europe’s big clubs who have started to make moves for new players.