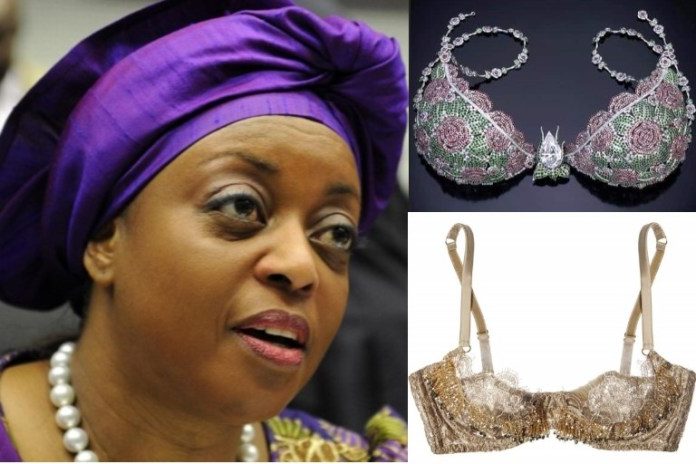 DIEZANI: Diamond Bra And A Government In-Search Of Boobs!—–By Bolaji O Akinyemi—-Suleiman was his name in the Quran, Solomon, in the Bible, a product of royal promiscuity, for the king has peep down from the pent of the palace, no wonder Islam frowns at houses with low fences. From a royal gaze at boobs, a rear breed among men was born, sampling a total of 1000 pair of breasts, 300 officially as wives and 700 as concubines! Only few men may ever come near his record!

His experience in “breastology” is better appreciated in his writing:

Songs of Solomon 4:5 (ISV):
“Your two breasts are like two fawns, twins of a gazelle grazing among the lilies.”

Solomon extol the beauty of womanhood whose dignity hangs in the chest area. The boobs separates women, the mature ones in terms of age, away from the girls who must in due time make manifest their inherent grace. A breast is a pound of flesh, encoded to grow soft and succulent in the wisdom of the Creator. It dangles when without bra to the irresistible admiration of a male beholder!

This temptation Islam sought to protect its men from when before the advent of bra, the hijab was invented and mandated for the women folks to keep its rhythmic movement away from the sight of men! The rhythm of a braless breast must not be imagined, but not anymore, those who are up in war for the use of hijab shamelessly hug bras in the public in search of a fitting boob!

Government, as an institution owe the people nothing more than trust. If there is anything leadership must earn, it is trust!

No matter the challenges a leadership is facing, if the people can still trust it, it will wriggle her way through it all!

The experience of Nigerians over the years as an independent nation has made trusting a confrontation!

You really don’t need facts in the public space to damage the image of anyone in Government!

The mind of the public is a fertile field for fallacies! Just drop its seed and you will have a fruitful tree of it overnight!

Corruption is a general word for convicting any Government and its members. Thus, it took no special effort to nail Goodluck Ebele Jonathan and the PDP family! “Like an animal wanted for dinner, it ran in to the evening bush fires. We just needed to wait till the morning to eat it for breakfast”. Once the propaganda machinery of the APC rolled out its conjectures and its many corrugated corruption allegations, a people hungry for democratic dividends consumed same in no time!

How else do we explain the Dasuki 2.2 billion dollars, illegally sliced off our national cake with the legal knife of arms deals! The crumbs of the cake has sent Olisa Metu to jail serving a sentence. The aroma of PDP corruption kept Femi Fani Kayode away from trials and now finally to serve the chef in APC’s kitchen as a steward of their dinning table! The bites from the cake negotiated Akpabio’s crossover!

Its carrots are still being dangled at sinners who will like to become saints! This, of course has left GEJ with watery mouth. How long he can resist his teeth to the carrot, time will tell in view of 2023!

Appraising Dasuki’s “crime” in the light of Democracy and the rule of law will leave us with a rape of justice, which is worse than the corruption itself, for the Federal Government consistently failed to honour court order granting him bail, including an Ecowas court judgement in 2016!

He was finally released on bail on December 24, 2019, with Buhari’s second term secured! He is yet to be seen around the court to answer to the charges that held him for four years! Shocking!

A piece of meal from Dasuki’s chunk got to Raymond Dokpesi, little wonder the media guru is neither here nor there, North or South, whichever way it goes in 2023! His portion is secured, better for him if it rests squarely with Tinubu, peer with whom he grew up, of whom he can testify that he has a fair attitude of sharing meals with his political elite class!

Attahiru Bafarawa seems to be better skilled in the act of spiritual warfare in the judgement of GEJ, than Pastor D.K Olukoya, without being disrespectful to the revered man of God, am just wandering why Olukoya was not given the contract if indeed we sincerely needed to pray, knowing he would have gladly done same pro bono to save us the huge cost they claimed was spent!

Howbeit local and expertriate warriors who were hired for prayers in Nigeria and Saudi Arabia to war against Boko Haram fed fat at his table! How well the war was fought, we all can tell with the state of insecurity in the country!

Who can blame General Burutai for falling for the temptation of spiritual war option when he cried out like a desperate youngman ravished by the breast of a beautiful maiden that, only spiritual war can end the engagement with Boko Haram? How do you face the dramatic fact that Dasuki, the man from whom so much spin is generated was possibly right beside his wife on their bed in their bedroom while I labour right through the night of November 18th 2021, the day a new birthday of me surfaced on the Facebook, with friends and fans sending me lovely greetings, without a dime!

For my labour to build a nation we all can be proud of, while the friends and fans of one David Adeleke, Davido, has sent him over a 140 million naira and still counting, for a birthday slated for the next day?

In the words of my 6 years old granddaughter, this life indeed is not balanced!

Distrust was the fate of PDP, the general feeling that they could no longer be relied upon overtook the country. The consequence was seen in the ballot results of 2015!

Trust is a necessary factor at making democratic decisions.

This, of course was well understood by the think tank at APC, Obama’s 1st world political marketer was brought in to the dynamic of marketing a brand whose value was known to confuse the market and make them buy! Trust is very vital to get a leadership sell to fly, but if you can get trust in its pure form, a mistrust will do!

Nigerians were too desperate for change that votes for doubt was what the realities of the distrust we were faced with, with PDP!

We were too traumatised to ask questions. Doubtful promises were made by APC which Nigerians embraced in doubt without doubt; a dollar was going to be equal to a naira, with no one asking how! We will create 5 million jobs every year, indeed the job of searching for jobs has been on the increase in tens of million since Baba took the saddle! As for the economy, we will diversify, undoubtedly the most diversified economy in the history of our country, with kidnapping enhanced, banditry encouraged, those who turned their back on the schools built by GEJ, a kafir, are having schools in the forests of evil, the dens of bandits under the supervision of an Ambassador of “peace” whose approach is every thing away from peace, Sheikh Gumi!

Distrust and mistrust are dynamics of our political marketing, like Babangida opined years back. Ours is a political movement of a little to the right, (PDP) if you will permit me to apply the evil genius’ principle, and to the left; (APC). It is left to us to stay focused, refuse the drawing to the right PDP, or to the left APC, and run the race we must to move forward for the emancipation of a new nation!

I was personally not surprised when a diamond bra appeared in the public bearing no breast! Bra comes in sizes, that a bra, size “36” hangs on the rope at the backyard of a house is no proof that the owner lives in that house. It could be the property of someone visiting! But this one is for a certain Sissy, a dignified career woman, who must be delineated by men whose wives are women, Fathers whose daughters are girls and boys whose sisters are girls and mothers are women!

But if men without dignity hang a bra in the market square on the rope of EFCC and told us who it belongs to, their experience in promiscuity can look at a bra and know whose it is! What happens to the gender whose privacy is made a public show of shame and whose dignity they sought to auction? Some women ranted carelessly while the bra hung on the rope in search of owner, they probed without pride the dignity of their own gender!

Now that Bawa, the EFCC rope manager has come out to take the bra from the rope into custody, that it doesn’t belong to the person accused, our women who knows it all will do well to apologise to their gender, while we await another puppet dance from EFCC and Malami the Puppeteer!

Their whoredom has commenced with this bra episode all because of 2023, and I need warn Nigerians that our political virginity is too precious to be given to men who daily eat imported canned sweet corn in the privacy of their homes, who will be coming to share roasted corn with us at the bus stop just for nothing but deception that we are one. But are we one with the elite class? Let your vote answer the question in 2023!

In this article:DIEZANI: Diamond Bra And A Government In-Search Of Boobs