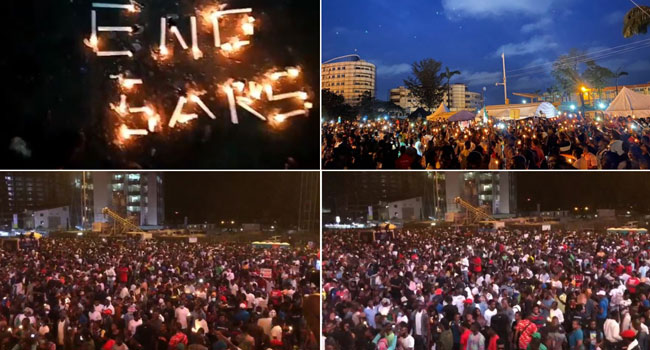 #EndSARS LEKKI PANEL REPORT: Fictions, Discrepancies And Assumptions—-There is an obvious fact, which no one can ever fault: only God knows what truly transpired or happened on 20th October, 2020, at Lekki Tollgate, Lagos.

Nevertheless, as humans, we all judge issues based on circumstantial evidence or evidentiary facts at our disposal. We all, including members of the Lagos State Panel of Enquiry, have our biases. Justice Doris Okuwobi, EndSARS protagonists and EndSARS antagonists will only want to believe what they want to believe. That is the absolute fact.

However, truth, as they say, is always truth, no matter how detestable it may sound or appear. And falsehood is eternally falsehood, no matter how popular, gratifying and delectable it is painted. The conscience is subconsciously aware of the truth, though we pretend to deny it.

The Lagos State Panel of Enquiry on EndSARS, under the chairmanship of Justice Doris Okuwobi, did a great disservice to many Nigerians. The report is a pure distortion of glaring facts and cannot, in the face of in-depth probe and sophisticated analysis, stand the test of time.. The report is fraught with discrepancies, irregularities and fallacious stances, which further substantiates the claim of some Nigerians that no one truly died in Lekki Tollgate.

Evidence abound that no one died in Lekki Tollgate. Conscientiously, we have, in the last one year, flooded the social media with impeccable and unimpeachable facts that the claim of massacre by a section of Nigerian youth was nothing close to the truth of the matter. The recent Panel report is excessively watery, baseless and unfounded. Let us quickly probe some people listed in the Panel’s report as deceased.

1. Kolade Johnson (Salami): Kolade was shot during a raid by officers of the Nigeria Police Command at Onipetesi, Lagos-Abeokuta Road, while watching an English premiership match between Tottenham and Manchester United on March 31, 2019. EndSARS was in October 2020. After his death, Governor Sanwo-Olu and the then Lagos Commissioner of Police, Zubair Muazu, visited Johnson’s family at that time. They were even compensated by the Panel. Why did they mix it up with Lekki issue. Kolade’s has nothing to do with Lekki violence.

3. Florunso Olabisi: Amidst the spread of fake news by EndSARS protagonists and supporters that one Folorunso Olabisi was shot by the Army and his corpse deposited at St. Nicholas Hospital, VI, Lagos. The Management of the Hospital later debunked the malicious claims that they did not receive any corpse in their hospital. Till date, no one has countered the claim of St. Nicholas Hospital. The fact remains that the purported death of Folorunso Olabisi remains a myth. How the name later crept to the Okuwobi Panel Report is surprising.

4. Jide: Sincerely, this is hilarious and laughable. I don’t want to believe that a retired Justice of the Lagos High Court approved this below-the-belt report for the public consumption. For God’s sake, what is the meaning of this? Who is Jide? No surname, no description, nothing! This is disgraceful!

5. Tola: Sincerely, this is hilarious and laughable. I don’t want to believe that a retired Justice of the Lagos High Court approved this below-the-belt report for the public consumption. For God’s sake, what is the meaning of this? Who is Tola? No surname, no description, nothing! This is disgraceful!

6. Wisdom: Sincerely, this is hilarious and laughable. I don’t want to believe that a retired Justice of the Lagos High Court approved this below-the-belt report for the public consumption. For God’s sake, what is the meaning of this? Who is Wisdom? No surname, no description, nothing! This is disgraceful!

7. Kenechukwu Ugoh: His identity could not be traced on social media. The only person, whose name is close to this, is not active on social. I went through the profiles of some of his family and friends. None of them said anything about him being dead. The Panel should tell us how they came about his name.

8. Olalekan Abideen Ashafa: There’s no one bearing this name on social. How he does not have a social media address or anyone declaring him dead is amazing.

9. Olamilekan Ajasa: There are some people bearing this name on Facebook. Some of them are active and alive. There is nothing pointing to the fact that they are dead.

These are the people Justice Okuwobi Panel wants us to believe died in Lekki, whereas there is no iota fact substantiating these claims. The Panel should have understood that that Nigerians are critical thinkers, who will not accept everything thrown at them hook, line and sinker. They will always probe the veracity of anything you tell them. Nigerians are greatly brilliant.

The truth of the matter is that the Nigerian Army, represented by Major General Ibrahim Taiwo, had spoken the pure truth on the day of presentation at the Panel. The presentation was evidence-based and devoid of empty emotions. The Army, as a public institution, deserves some respect from Governor Babajide Sanwo-Olu. Their report has brought the truth to bare. Many of us, as well, have presented the truth in its plainest form. Our reports deserve to be looked into, not the report of those who have proven not to be neutral right from the inception of the report.

In conclusion, I implore Governor Babajide Sanwo-Olu to think deep and ponder on this report before accepting it as a fact. The report is in no way different from all the junks reported by CNN, some Nigerian newspapers and their social media acolytes. It is full of irregularities, discrepancies and fictions. It will be a great disservice to many Nigerians if the report is in anyway considered.

The Lagos State Attorney-General and Commissioner of Justice, Mr Moyosore Onigbanjo (SAN), should thoroughly go through the report before raising any White Paper as ordered by the Governor. Those who killed and maimed our security operatives and innocent citizens and destroyed public and private property deserve to be punished, not compensated for their criminal acts.

In this article:#EndSARS LEKKI PANEL REPORT