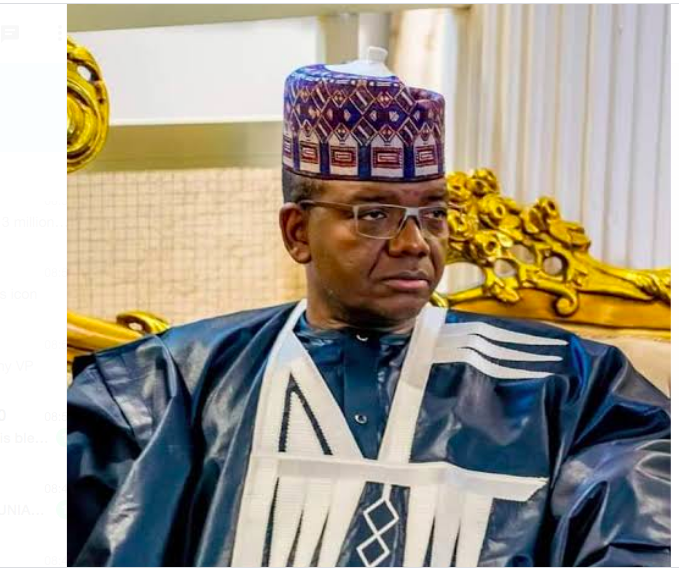 EXECUTIVE BABYSITTING: How Governor Matawalle Locks Zamfara State And Jets Out To United States To Attend To His Nursing Wife—-How best do you describe a man who locked up his state for months only to jet out to the United States of America to babysit for one of his numerous wives who just deliver, than being callous.

Governor Bello Matawalle of Zamfara State left the country for the United States of America, after vowing that he would limit his movements and share in pains of his people as a result of the ban on mobile telecommunications in the state.

The Governor who has found it extremely difficult to bear some of the pains the people he sworn to protect are facing, after sneaking out of the state to Abuja so as to continue to enjoy the luxury he denied his people, left the country without handling over to his Deputy or the Speaker of the State House of Assembly.

The governor who vowed that the telecommunication ban would remain until the bandits terrorising the state were dealt with, left the country for the US after vowing that he would limit his movements and share in the pains that might accompany the ban on mobile telecommunications in the state.

The underperforming Governor sneaked out of the country to attend to family functions, only to claim that he was part of President Muhammadu Buhari’s entourage to the 76th Session of the United Nations General Assembly (UNGA76), when the pressure was much on him and his state was seriously under various attacks.

The hardship being faced by the good people of Zamfara was severe that people in the state now travel to Sokoto and Funtua in Katsina State to make calls, send messages and do financial transactions.

Even with all these hardships and several attacks by bandits, Governor Matawalle, while speaking via BBC Hausa Service sometimes ago said; the ban will continue indefinitely while he lavishes Zamfara resources on family trips, buying and acquiring properties all around the world.

To worsen the situation, anytime Governor Matawalle is not in town, the Zamfara State Government House, ministries and agencies are always deserted.

Since non of these government functionaries are on seat, most workers also stayed away from their offices, left files unattended to as people groan.

Non of his over 500 aides will be working aside his media propagandist who will be busy shunning out lies.

One of the top politicians in Zamfara and a respected voice in the All Progressive Congress, APC, in the state, (name withhed) disclosed to our reporter that; “most of his propagandist knows him very well. He is a drug addict. Anytime he’s on drug, they won’t allow people to see him. They will dissuade the minds of people from the reality on ground, only to report propagandas.

It is also worthy to note that despite his much publicized peace deals with the bandits where millions of naira was siphoned in the purchase of about 15 brand new Hilux vehicles and cash gifts to leaders of different ‘repentant’ gangs of bandits by the governor in 2020, deadly attacks have been raging continually across Zamfara State where bandits have thrived.

Farming and herding communities in the state have long been terrorised by gangs who raid villages, stealing cattle and kidnap residents for ransom. With no end in sight.

A rudderless leadership, the issue of banditry became more pronounced in the state because of his lacklustre performance and lack of wills of all those who are currently working with him.

In this article:How Governor Matawalle Locks Zamfara State And Jets Out To United States To Attend To His Nursing Wife